Up to 50% (Dealt) + Cryptobettor Rakeback

Seals with Clubs is an established brand with the best cash game traffic amongst Crypto Poker Sites in the current environment. The software is good, and the mobile app is handy for recreational players who want to play on the go. Overall if you are playing crypto poker, Seals is a must have.

8.0
Total Score
You have rated this

We offer a rakeback deal for new accounts on Seals with Clubs Poker. Please continue here before signing up for a new account or email support for further details.

In the current crypto poker environment, seals has the top traffic of any online crypto poker site. They have an advantage from being one of the oldest established crypto facing (bitcoin only) poker rooms. This has allowed for many US players to join the action here without worries of regulation and inconsistent deposits and withdrawals.

However, even whilest being the leader in crypto poker room traffic, you cannot expect pokerstars level traffic. There is action at the lower stakes but not much in terms of higher stakes unless you play higher stakes HU cash. In the evenings (Eastern or Pacific time), it can be pretty easy to get 5-6 tables of cash games going.

The most popular games on Seals are cash games. Freerolls are a nice addition as well. There are SNGs but they don’t play very much as well as mtts. They offer a weekly “Big BTC” tournament which is advertised as the largest weekly bitcoin poker tournament. The buyin is 0.25 BTC (250 chips) and we guarantee a prize pool of at least 10 BTC (10,000 chips). The guaranteed tournament does attract some traffic to the site with overlays being possible at times. 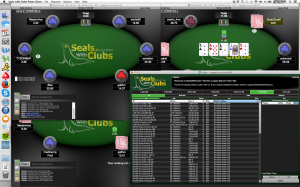 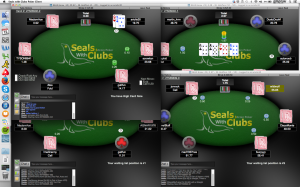 One of the great features of seals is the multi platform compatibility. Not only do they have a PC client but they also have Linux and Mac client as well as an android app (mentioned later) which is important to attract different players.

The PC and Mac versions are relatively solid although multi tabling sometimes is difficult as it is somewhat hard to adjust the tables. You can size the tables to be the same size and preferred seat option which is a plus. They also have an end session on the bb button which is key for mass grinders. In comparison, alot of other weaker platforms especially the US facing ones make you end it manually.

A bug we found in Seals poker is that when you scroll to bet chips it is really buggy and if you’re not experienced in multi tabling it can be foresee that there would be a lot of misclicks when betting. Also, they need to fix the player note function as it seems like that has never been available or working.

Time bank offered at seals is 65 seconds which is pretty solid and ensures playability for multi table grinding.

Seals has their own built Android app to play in the poker room. We found that it was relatively solid although some of the same bugs such as selecting betsizes and player notes are not working efficiently. We would not recommend playing more than 2 tables on the app, as even 2 tables can lead to a lot of errors going back and forth between tables. 1 tabling was ok on the android app. 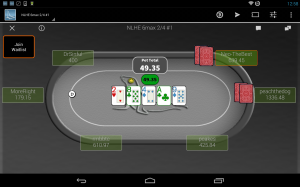 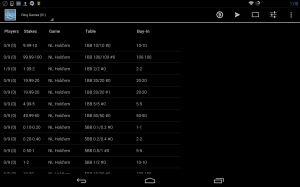 Although there are bugs in the software, in today’s crypto poker environment Seals is among the best option available to poker players on a variety of platforms.

Users expecting near instant deposits might be a bit depositing when playing at Seals poker. Deposits require two confirmations which usually takes 30 minutes or more. We can understand not having zero confirmation deposits, as a lot of chip dumping would likely be taking place right after a deposit is done.

Cashouts are processed manually with an average wait time of 12 hours. The reason for the long wait time is that they manually check and process withdrawals to make sure that the account hasn’t been actively participating in any collusion. Since this is ‘anonymous’ poker and collusion can be a big problem, this is understandable.

Overall we understand why Seals does what it does, we just hope it can be done faster.

Seals offers support through email only, and we found their email support to be on par with most major online poker rooms.

The response time was above average, and we received a reply within 6 hours. The detail of the reply was above average and the responses are mostly individual not some generic template that most sites do. Make sure you only email support from your registered email address as they require that (as do most poker rooms) before they can give any specific non general support options.

Seals has a unique rakeback system that is tied to points known as Krill. These can be related to VPPs in pokerstars, however one key thing is that the levels are lifetime and are not reset yearly. At the highest tier players can receive 50% rakeback, although with the current traffic at the site it can be relatively hard to grind all the way to 10 million Krill.

Seals is one of the oldest and most established crypto poker rooms. They were established in August2011 after black friday and strived to create a good poker room for US players that were unable to play poker due to government regulations.

SITE TRAFFIC (4/10) As an up and comer in the crypto poker world, Betcoin is currently struggling with traffic and most hours of the day, the lobby is pretty empty. With the promotional push they have made combined with an excellent backing, we [...]
Comments
Leave a reply